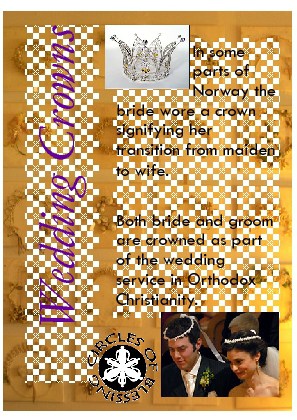 In an Orthodox wedding the crowns or stefana are symbols representing the creation of a new household or “kingdom”.  The crowning establishes the couple as the King and Queen of their home, which they rule with wisdom, justice, and integrity. The crowns used in the Orthodox wedding ceremony also refer to the crown of martyrdom, since every true marriage involves self-sacrifice on both sides.

The open and airy Scandinavian wedding crowns often have gems or charms hanging from them. In Norway, it is believed that the musical sound of the silver charms tinkling around the bride’s crown will help to protect her from evil spirits.  In some parts of medieval Europe, the wedding crown was a symbol of the bride’s transition from unmarried young woman to wife. It was worn for the in-between stage, when one was no longer a maiden, but not quite yet a wife.